I think kids are natural nature lovers.  They would naturally play in the dirt (and many will eat dirt) but in our high-hygiene culture we train it out of them.  Ok, I’m fine with teaching kids to not eat dirt, but lots of people are paranoid of dirt and germs in general.  Hyper hygiene has turned out to be bad for us.

Its never been a problem for our family.  We’ve raised our kids playing in the dirt and being connected with nature.  Our first 2 girls were raised on acreage where we built our log house and later another house.  They played with snakes, washed shrews, climbed trees (beyond my comfort-zone) and watched an injured mouse give birth prematurely to her pups.  Their hands and feet were dirty but their hearts were full of wonder and joy.

The last 7 kids didn’t have the privilege of forested acreage, but they did have space to dig and explore, and have had more of an unconventional upbringing with our travels over the past nearly-8 years.  They, too, have played with snakes, collected ants, kept mice and hermit crabs as pets.  They play in the sand and dirt, creating fairy lands from their imaginations.

Our kids have had the typical flu every couple of years, but for the most part we have a pretty healthy crew.  That’s quite an accomplishment for 11 people not to be bringing sickness home to base camp.  And let me tell you, when base camp gets sick it can literally take 2 months to work its way thru the ranks.  Usually a few people miss it, but just one new patient getting sick every 5 days or so one-at-a-time means we’ve got sickies for 7 weeks or so.  Not Nice!  Although it wasn’t nice at the time, it was good to have all 7 kids get the chicken-pox at basically the same time.  Otherwise, we could have been in quarantine about a kazillion-weeks!!

I personally believe we’re not sick as often as other families for a few reasons:

So with their outdoor play they find things.  Like rattlesnakes in the swimming pool, and bats hanging in the trees.  And birds that have fallen out of their nests.

Nest builders can be pretty quick, and us humans can be somewhat unobservant.  So how fast those swallows built their nests and laid those eggs above the hotel doorways, I’m not sure.  But before we knew it there were eggs and thus the invisible but obvious No Disturbing Signs went out.

They crapped at our doorstep.  Thankfully, never got our heads.  But they made a mess right where we step.  And pooping in the wind resulted in poop-patterns on our screens.  Thanks a lot!

We occasionally peeked into the nests, but its hard to get a glimpse between how tightly they build those nests under the roofline, and the darting parents desperate for us to keep-on-movin’.

Then one day we heard chirping from the 2 eggs and the busyness increased as the parents had 24-hour delivery service on the go.  And we wondered how long before the birds flew the coop and the poop stopped collecting.

Typically we find babies fallen, or possibly kicked out of the nest.  Is this natures way of eliminating the weaker?  Last year the girls ‘rescued’ a dove, and as diligently as they tried to save it it died.  As did this bird. 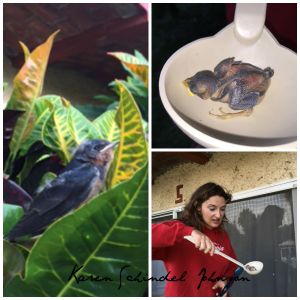 One Sunday in rainy season Everette and I sat outside our suite with our morning coffee and there, sitting beside us was a baby bird.  The nest was empty and we found the second baby in the same shrub beside us.

The hotel was busy with people coming and going as it usually is on weekends.  The cobblestone driveway was littered with other young birds trying desperately to take flight.  As far as I know, no babes were run over, and all seemed to disappear by the end of the day.

So I put together a few clips of the progression from eggs to flight, although we didn’t catch them actually in flight.  And now its time to remove the nests from above each of our doors, and clean up the crap.