Some of us are waiting for renewed passports so we weren’t able to do the actual border-run when our van needed to exit the country.  Extra people (Toveli, Laars and I) joined the traveling north as moral support, but just Everette and Danaka did the actual border crossing to get the van checked out…. just to get it checked back in in one day, making it all legal.

Their morning started before sunrise and said it was quite beautiful in the Monterrey area. 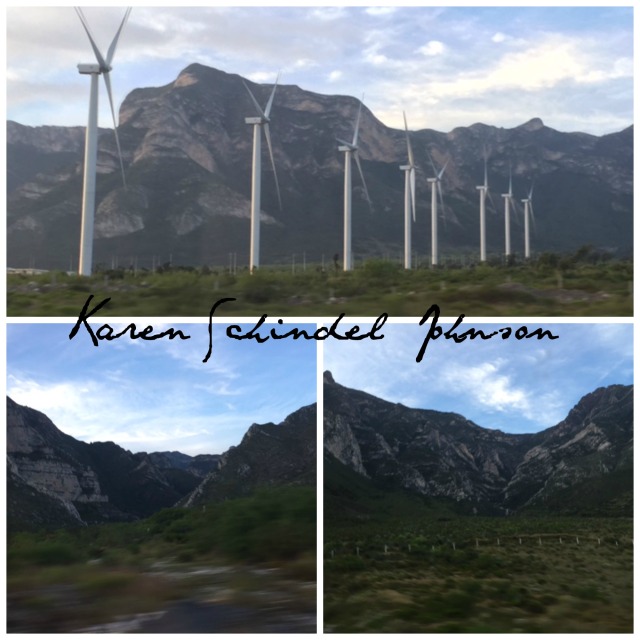 After that their day was uneventful (& not photographed <sad>), with landscape after Monterrey that was pretty flat with a cruddy but straight highway, and high tolls.

They had a fairly intense inspection going into the USA (Laredo, TX) with the men clumsily using a rickety ladder to get to the boxes on the top of the van (Everette said it was quite comical!), and aided by a Dutch Shepherd in and around the van.  Nothing found (nothing hidden!) but Everette did worry a bit about the cannabis oil I’ve been using for some basal cell carcinoma I’ve been treating.  I had taken it with us to Saltillo but kept it at the hotel with me….would the dog sniff the aroma of it out?  Would they rip the whole van apart, searching?

Cleared, Everette and Danaka ventured in to Texas for lunch, a bit of shopping, and turned around to easily enter into Mexico again.

They got their tourist visas & a T.I.P. (temporary importation permit lasts 6 months) for the van at the Columbia crossing in less than 10 minutes. So simple heading south.  They ventured back to Saltillo where Toveli, Laars and I were waiting at the hotel… spending a lazy day watching TV (for them, a novelty) and working on blog posts (me).

The deed is done and we can get back to Chapala and the rest of the family.  Yeah.  Home, here we come!

One thought on “Way to Texas”