I’ve never been bothered by getting older.  One of my inlaws wasn’t bothered by turning 30, but turning 31 was an issue as now she was Thirty-something!!  Actually, I like getting older….I guess I’m hoping to get wiser in the process but I’m not convinced its working and neither is anybody else.  Nevertheless, every year I keep trying!!

So I was looking foward to turning 50, the half-century.  Ok, so for a moment the realization that I am likely now more than half-ways done my life did hit me.  My heart fluttered…what the heck have I done with my life?  But the heart calmed and I went on enjoying the realization that I’ve worked 50 years to get to this moment, and I was going to enjoy it.

I had dreams of grandeur, of a smattering of spoiling, of doing something extravagant and memorable.  I had hoped we would be in Guanajauto or San Miguel de Allende, or climbing the Pyramids of the Sun or Moon.  But reality set in and the costs associated with that and….well, we stayed put.  And let Layne catch up with us here to spend her one week vacation time with us here in Mexico (for her third year!).

Before we set out for the day we had a little gift-giving time where I opened gifts from our eldest daughters.  Our family tends to shun ornate and go for the earthy, natural products, so Layne picked out a beautiful leather journal for my writings.

Rauchelle had given me a deer jaw-bone carved into a snake pendant for Mother’s Day last year (you can see me wearing it in the above photo), and knowing that I adore turtles she took an elk jawbone and whittled out this for….. “Mommy Mother Dearest of Mine”

Rauchelle also packaged up some coffee syrups. Took me until the evening Tamale Party for me to realize why the label said JOKES but I got it.  I might be fifty but I’m no dim-whit.  (JOhnson+burKES=JOKES)

Off some of us went to take in the savoury tastes/smells and colourful delights of the street markets in Tonala, a suburb of Guadalajara.  We poked our noses in stalls looking for gifts Layne could take back to Canada.  Juan Ramon delighted us with his personality & frivolity and soothed us with his solar-heated black rocks as he massaged each of us.  We dug through his pile trying to identify both raw and polished stones, and we bought rocks from him for birthday gifts and keepsakes.  Layne is currently taking a Geology course which has revived her childhood fascination with rocks so she was quite in her glory rummaging thru Juan Ramon’s stall.

We treated ourselves to shaved ice (like a slushie but waaaay better) topped with kiwi, fresa (strawberries) and pina (pineapple) but oh where, oh where did that cute snapshot of me and my girls disappear to?  Then we stopped for late lunch….I don’t know what they were called and no photo again.  Argh, I’ve got to have smoother transition between that new iPhone6 and blogging.  Between adjusting to a new tool and the fact that our camera is failing us already, this is frustrating, the main culprit behind why I have been so slow to post on the blog.  Argh! 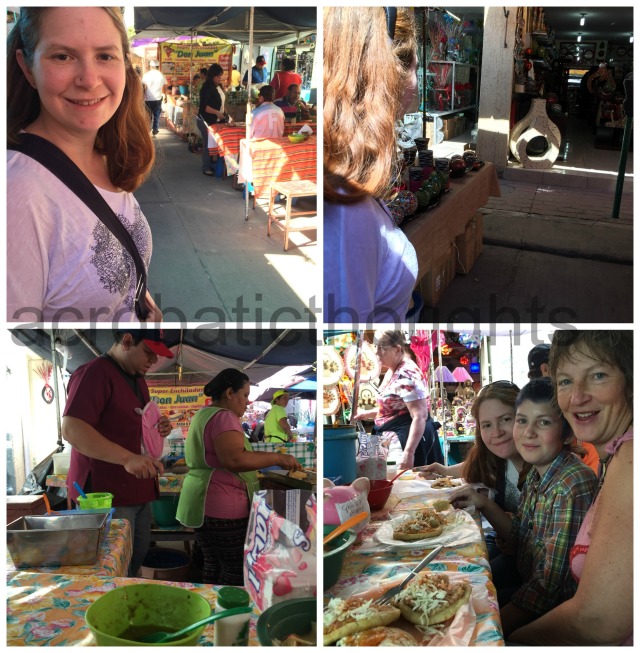 It was a great day spent in the market,  loving the hubbub, the dickering, the colours and variety….the overall aura of the place.  And as we drove down the main street heading for the highway back to Chapala we bought some shades for the van with the traffic urging us on from the intersection while the saleslady hustled down the road to give us the change…quite a Mexican experience.  Oh, I love Mexico!!

In January our community had a King’s Cake and Anders ‘won’ a baby Jesus (we discovered its also referred to as a ‘monkey’ but I can’t really figure the connection out??) so we were to help put on a party for everybody else with tamales.  Normally it would be on Feb 2nd but it had to be postponed until my birthday.  With full tummies we went over to socialize with our community, and somehow most of my family managed to stuff in a tamale wrapped in banana leaves and a Mexican hot chocolate made by Suzanna, with the touch of cinnamon I so enjoy. 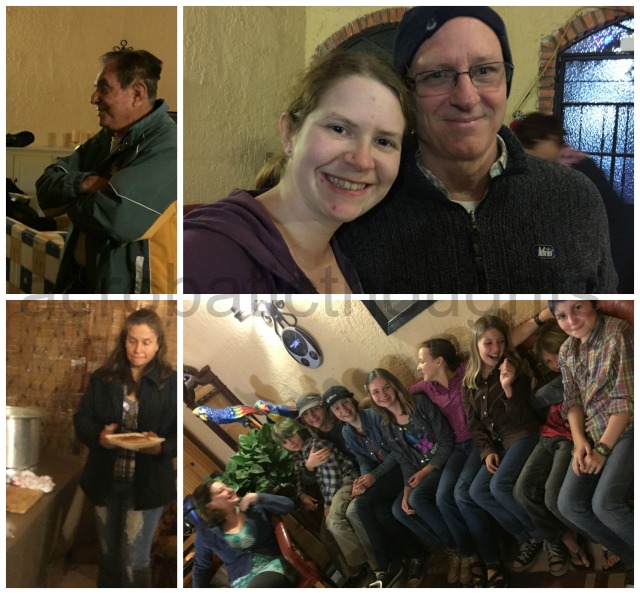 An already full day we finished it with a viewing of Selma.  We are working thru the list of Academy Awards nominations before the Awards are issued on Feb 22nd.  We’re running out of time 🙂  Get the popcorn popping, Mark D!!

3 thoughts on “My Fiftieth WooHoot!!”