It’s been a GREAT year, this 2014.  And we anticipate that 2015 is going to be even better.  More adventures we haven’t even dreamed of, because after all, a lot of 2014 played out completely different than we had imagined at the beginning of the year.  Bigger and Better it turned out to be so that’s what I’m expecting for 2015.

With only hours left before we flip the calendar to the New Year here’s an overview of highlights from our past year.

JANUARY: The year started at Barra de Navidad where a few days later my mom and sister Joanne came to visit.  Though us Johnsons were all sick, we fit in crocodiles and cafe and markets.  After they left we camped on the beaches in Michoacan. Beautiful….

and before the month was out we were ‘living’ at Ajijic, Jalisco but left shortly for the mountainous interior of Michoacan state where our eldest Layne came to visit us and we celebrated Maret’s 14th Birthday. 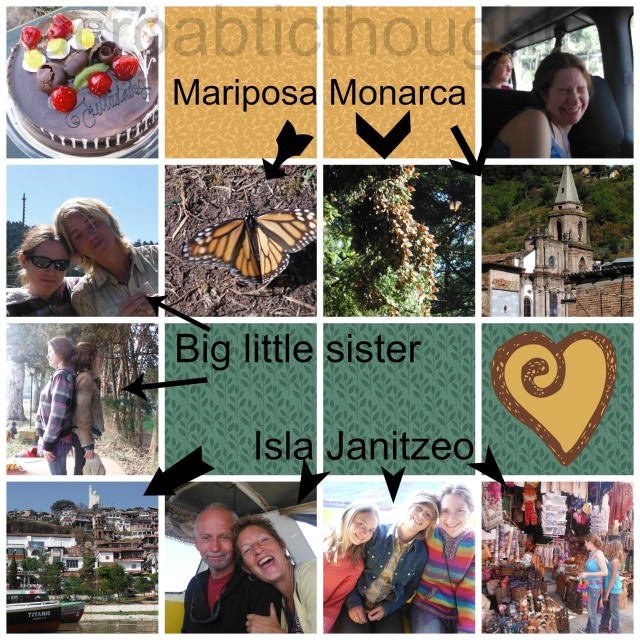 We  ventured up into the mountains to marvel at the Monarch butterflies, and visited wonderful Mexican artistic communities famous for copper, furniture making, etc.  We loved this area of Mexico.

FEBRUARY: This is the highest concentration of family celebrations with 3 of our birthdays and Everette’s and my wedding anniversary.  We had a Tigger celebration for Gaelyn’s birthday, and went to the zoo in Guadalajara for Anders’.  That sweet little family, the Sampson’s….their little girl’s birthday is also in February, and we’re hoping they’ll join us this February so we can all celebrate together when their precious K will be turning magical 2!

MARCH: Toveli turned Twelve.  The kids spent loads of time all spring volunteering with the dog rescue, and for near two weeks they attempted to rescue this mourning dove but sadly it died.  But what a huge learning experience that was.

A highlight of the month was helping prep and celebrate their friend E’s 13th ‘Doctor Who’ birthday.

APRIL: We had to temporarily ‘move’ into a couple of apartments in April which helped us prep for our drive north to Canada.  (We thought we were going to be moving to Puerto Rico, but that never transpired.)

MAY: End of April we received a Petition from our children, insisting that we hurry north to surprise their sister Rauchelle for her birthday.  So, we headed to Portland, OR.  Inspite of van troubles & sandstorms we covered coastal northern Mexico, Arizona, Nevada and California (& here) lickety split and arrived in Oregon in plenty of time.

When we got back to British Columbia, a friend we knew from previous years thru homeschooling, invited us to share her house with her and her 3 kids.  Just that gesture helped shape our entire summer, which has become one of our children’s FAVOURED SUMMERS OF ALL TIME!!  Thanks, Shelley! 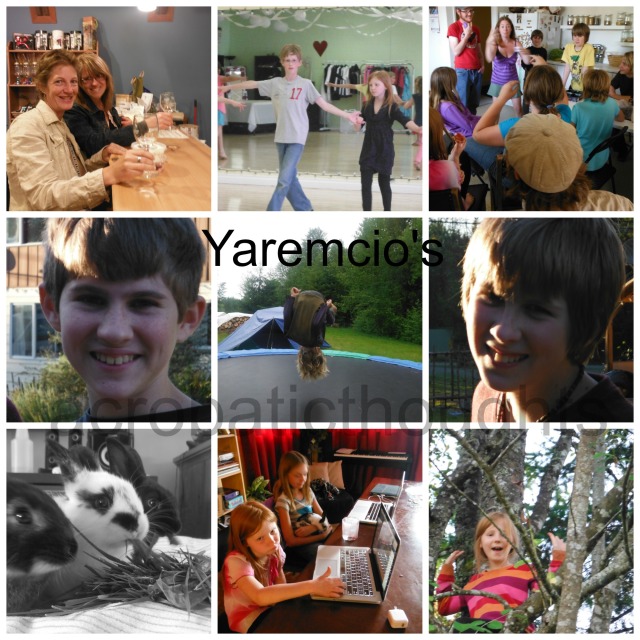 Shelley introduced us to the Hamilton’s (Chris and Shelly).  We had showed up to volunteer at their Hobby Farm, but what I discovered later was that Shelly H was initially overwhelmed with our crew and worried that we would be ‘too much’ for her to use.  But, we filled in a need (she desperately wanted help with preschool groups during the week while regular school-aged volunteers were still in school) and that turned in to the kids volunteering full time for the summer, and the family moved onto the farm.

JUNE: We enjoyed the summer being at the beaches in Parksville and Qualicum Beach, or stomping grounds for near 20 years of married bliss.  Fun to see our kids enjoy their time here, too.  We left here when Laars was just 2.5 months old.  This summer he turned 7 as we celebrated with our Ortwein friends on the beach at Qualicum.

JULY: Danaka and Everette spent 2 weeks in Puerto Rico, a few days of which was taking a certification course on Aquaponics, in anticipation of our family settling on the island in the Caribbean sun (wasn’t to be).  While they sweltered in the heat there, we enjoyed a Canada Day and summer days at the Hamilton Hobby Farm. 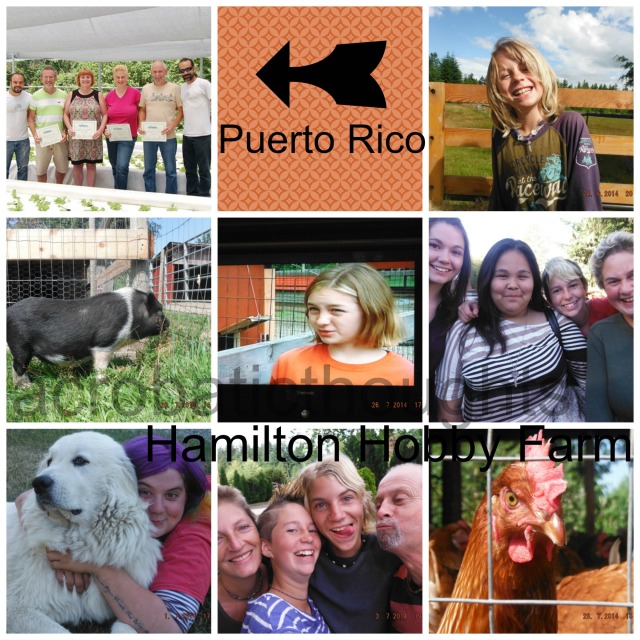 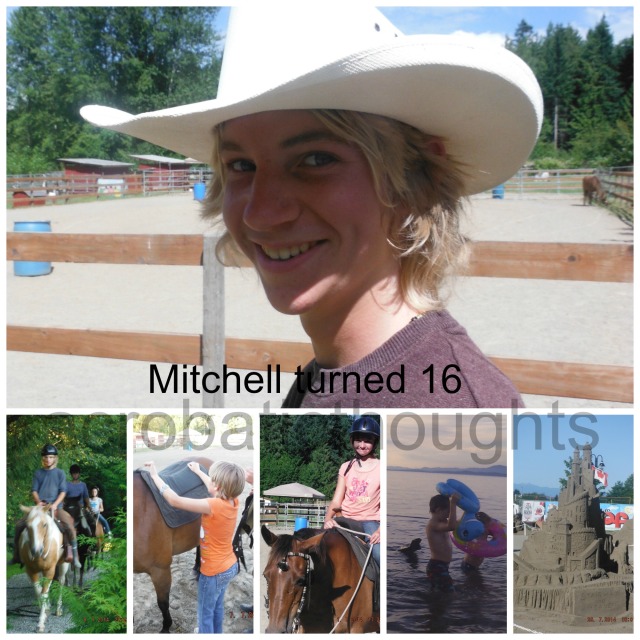 AUGUST: Throughout the summer we visited with family and friends.  We shaved heads as we dealt with lice for the very first time, and took excursions to Cathedral Grove, Englishmen River Falls, Lake Cowichan, Duncan, Bramberton, Sooke and (local) Coombs.

And we made a special trip back down to Portland to share in our Precious Marin’s Second Birthday.

SEPTEMBER: In anticipation of the Farm closing for the winter the kids put in more hours of riding.  Danaka enjoyed ground work but got herself up in the saddle a few times….just can’t find any photos to prove it!  Shelly Hamilton, you got any???

There was a Year End Party for the farm, the kids helped with final chores before we headed south for another winter.  It was sad Goodbye’s to give, having spent four and a half months getting to know and then loving these people that let us become part of their family.  Kudos to the Hamilton’s.

OCTOBER: We’ve only got one son-in-law at present so he’s high on our priority list so we drove internationally (!!) to be there for his 4oth Birthday.  Well, ok, so they were on our route south….but we would certainly go out of the way for those Burkes anyways.  They are some of our very favourite people, even if we don’t see eye to eye on things.  We still enjoy spending time with them, and celebrating some of the big days of the year with them.  Any day would be nice to spend with them….we’ll take all the days we can get.

And just before we were going to celebrate Halloween and Where the Wild Things Are our second granddaughter showed up. 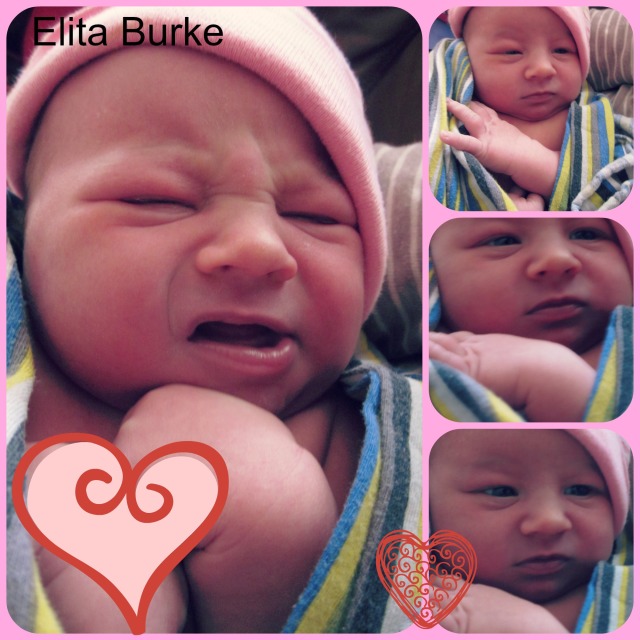 NOVEMBER: I had stayed behind in Portland to witness the birth of Elita and provide support for Rauchelle, along with Maret and Mitchell while Everette and the other kids headed to warmer (except at night) climes in anticipation of heading to Mexico.  Finally we were reunited in early November and we made a quick trip south.  We were blessed to be invited to camp at Squire and Cami’s yard in Alamos, a town in the hills of Sonora state where we had never gone before.  It was a delightful weekend with new drinks (Cami started me on gin and tonic) and new friendships and a wonderful time of music.  We arrived at our Mexican destination near the town of Ajijic by the 18th….in time to celebrate Thanksgiving.

DECEMBER: This is month of festivities all around the world, and certainly here in Mexico.  The children helped Tina decorate for every event there is here at Hotel Perico, and they enjoy attending each festive event, too.  The boys are becoming real dancers (the style is hard to decipher).  We could all do with more practise.

And today….what have we done today?  Nice enough for a swim in the outdoor pool, and I worked on this here post reminiscing over pictures. 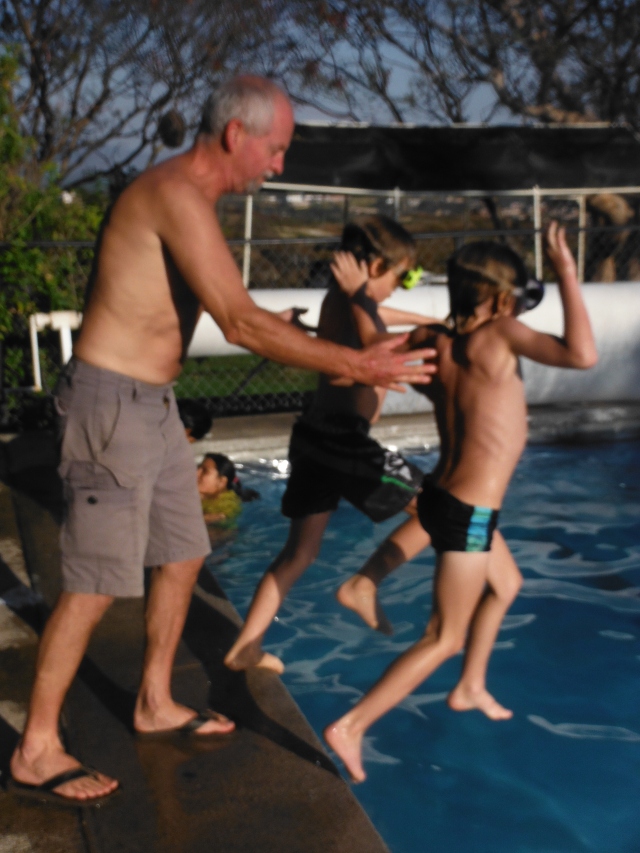 The kids are watching a movie, eating chips trying to stay awake in anticipation of champagne at midnight when Everette will blow the shofar and we’ll probably be hearing Mexican music to blaring and the fireworks going off.  All to wish each other….. 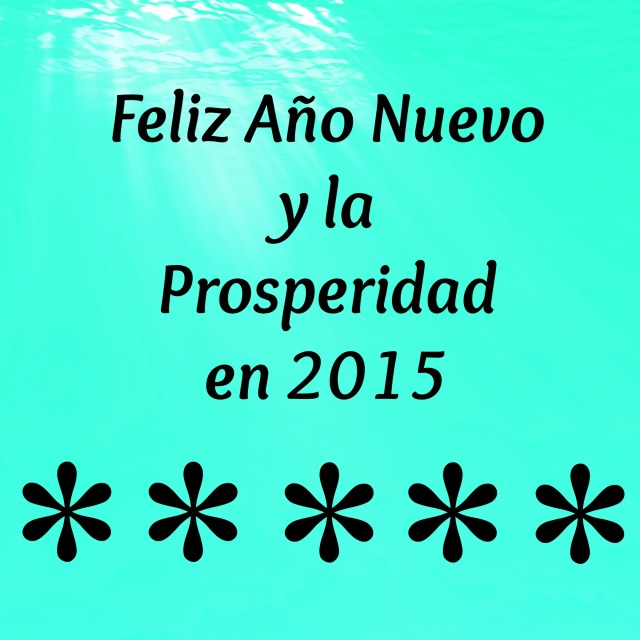