We made it as far as San Carlos just a few hours drive south of Bahia de Kino.  It’s a beach town with far more development and gringo presence with a couple of marinas, four-lane boulevards, exclusive condos and hopping-busy coffee shops with free wifi.  It looks like there had been big development plans that didn’t quite pan out, or it’s just that it’s on Mexican time.  Often when they get around to finishing a project the first part of the project already lies in semi-ruin.

But then, I guess that’s still part of the charm. It is not Norte America and that’s why we like it so much.

Siblings, teens, best-buddies, walking down the beach being a nuisance to each other.  Loving every moment of it.

We found a secluded pebble beach away from the resorts and have no idea what came of him.  We’ll stay a few nights at least, kayaking, exploring the craggy rocks, collecting rocks and shells and sea urchins.  Everette and Mitchell are scouting the dry docks in case they find the deal of the century.  Who knows what they’ll find.

We went into town for a coffee and some groceries which took us all day, meeting people from Manitoba (-47C in Regina, SK you’ve got to be kidding?!) and Washington State who are glad to be out of the cold.  We don’t blame them for buying houses here or renting for the winter months; and don’t envy them one iota when their stay here is up. 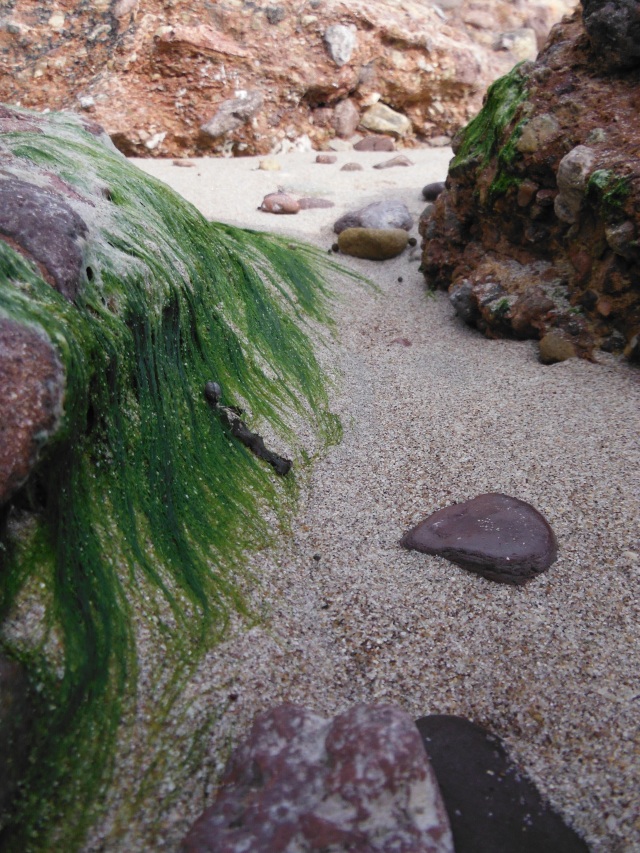 The community is stretched out over 8 km or something like that, pockets of houses dotting the hillside or down at the water’s edge here and there; very picturesque, stucco houses with palapas on top-floor patios and picture-windows demanding exquisite views of the bay studded with rugged islands.  Marinas nearly at their doorsteps.

We get our groceries, struggle with our limited Spanish while attempting conversations with Mexican shoppers and employees.  We all giggle sheepishly at our attempts at a second language.

We get our main groceries at the store, but outside we visit vendors with fresh strawberries, seafood and honey.  We’ll have shrimp tonight, after an appetizer of fresh berries, bananas and crema (crema is like a thin cream cheese you scoop like a slightly whipped cream) and cajeta (caramel sauce).  Eating dessert first.  That way if we were to die before our main meal we would have ended on a sweet note!

The vendor said the honey was fresh. The bee was still wiggling when we dug him out of the honey.