An actual western round-up of the cattle wound-up the day before our family arrived at the Empire Ranch and BLM land.  Would have been nice to see, though probably results in eating dirt all day long.

The Round-Up was really more of an Open House with displays and “Cowboy Conversations” in the rooms of the ranch.  Trades related to the wild west were on display or demonstrated,  and items For Sale. Things like leather works, blacksmithing, making rope from different kinds of hairs. 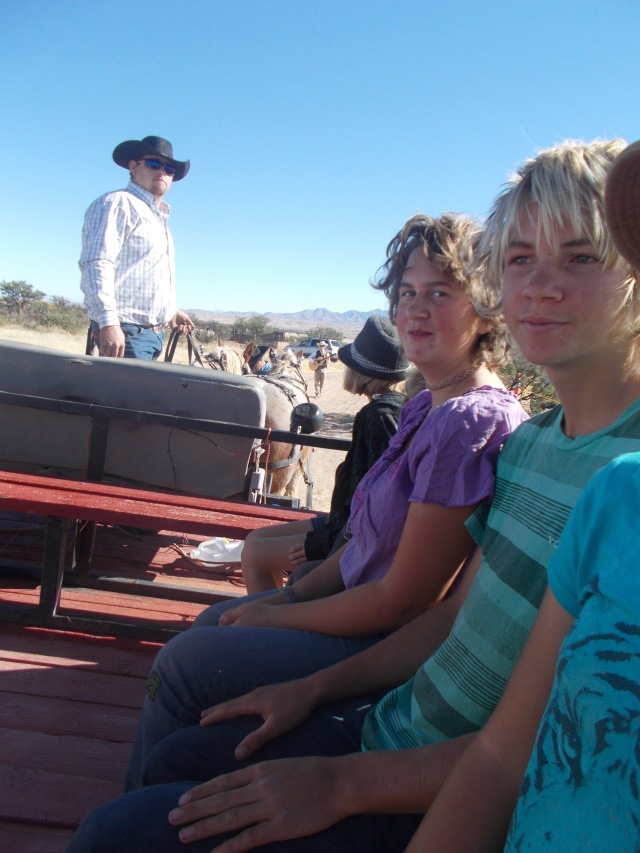 The kids were totally impressed when the morning began with a free wagon ride from the parking lot to where the activities were taking place.  Good starts are great!

We wandered around, listening to a fellow riding a horse talking about natural horsemanship, a total respect for the nature of a horse rather then the typical owner/master and his creature.  We learned about branding, castration and immunization of cattle and horses.  A bit of an impromptu birds’ n bees talk. 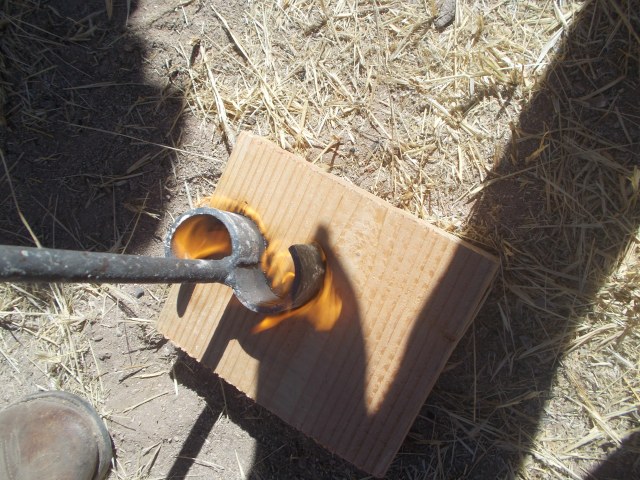 The kids could pick the brands they wanted and practiced branding on a block of wood!

These slip into the nose like a nose ring, and when the calf tries to suckle the mama gets poked with the spikes and thus kicks the calf. Quickly deters the calf from attempting to nurse ever again. Efficient (but nasty).

We watched Jesus show people how to card horse or cow tail hairs to twist into rope. 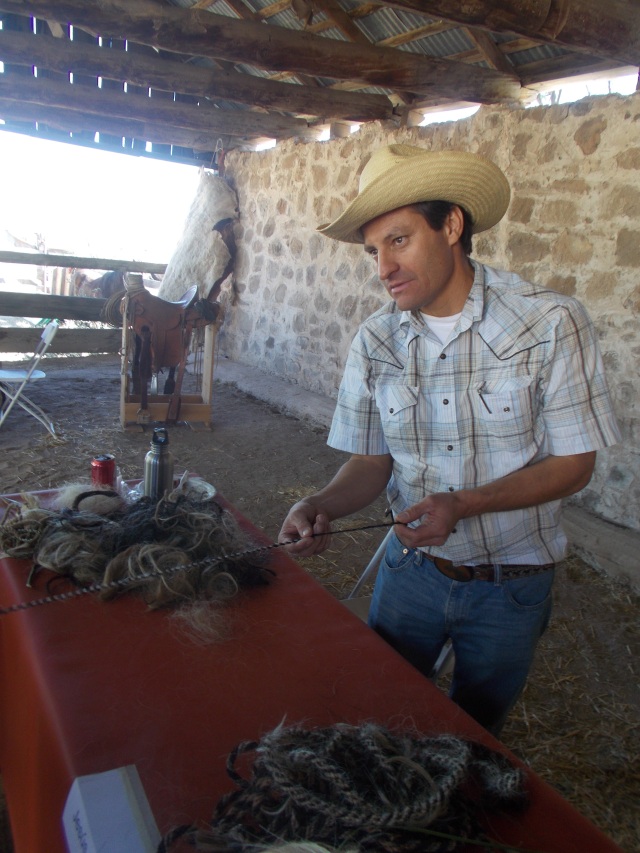 Ben used to be a cowboy, but when arthritis set in he sat down and took up leather working 30 years ago and absolutely loves it.  He says there isn’t anything else he’d rather be doing.  That’s the way to live life! 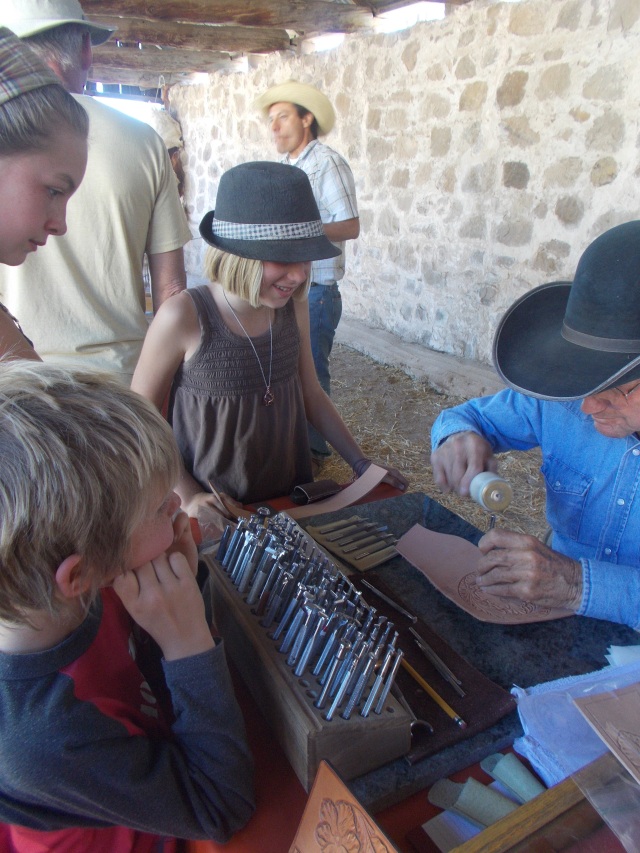 We stood patiently watching Ben do his art, asking questions as he worked away.  When he was all done he put his name stamp on it, then handed it to Anders and said “This is a gift from my family to your family.”  How sweet!  He obviously spent a lot of time working on it, adding fine details with his love.  I think we might re-cut the leather piece a bit and make it into a trivet, or do something else to make a keepsake of some sort.

Anyone got some ideas to share?  The pattern has a 5″ diameter.

Blacksmithing got a lot of attention from our family, too.  What a slow, tedious job or hobby that results in some really cool stuff!  We stood what seemed like an hour in the sun watching an old farrier’s file begin to morph into a snake which might eventually become a door knocker. 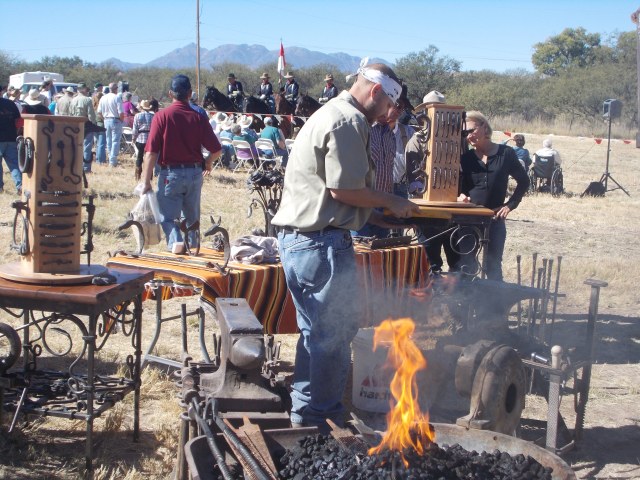 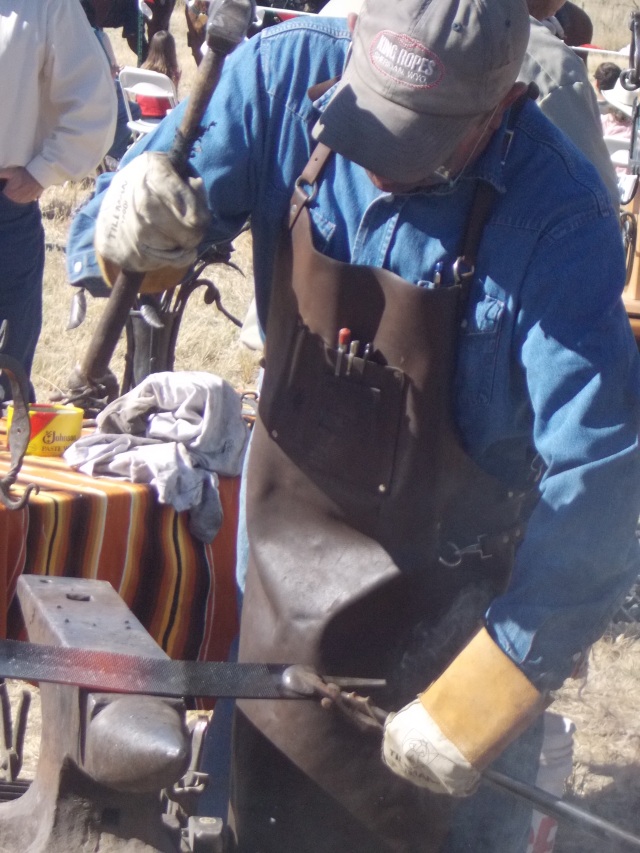 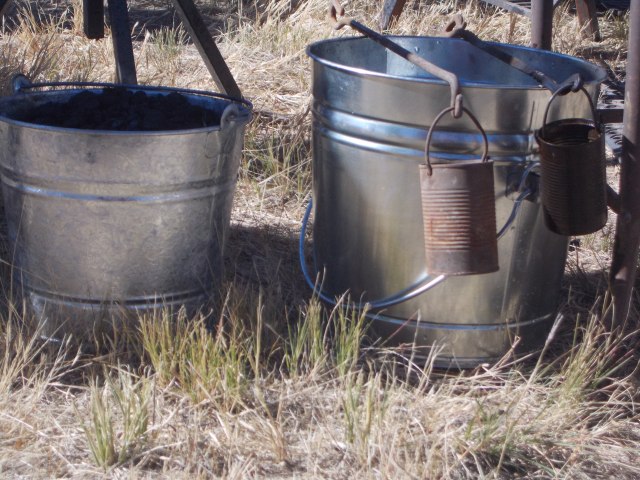 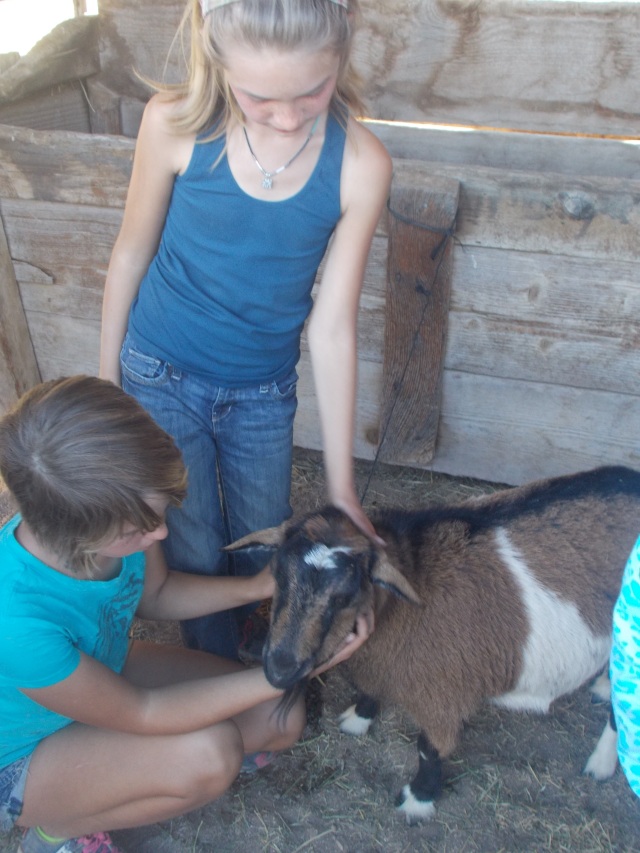 Maret and Toveli with a dwarf Nigerian dairy goat. 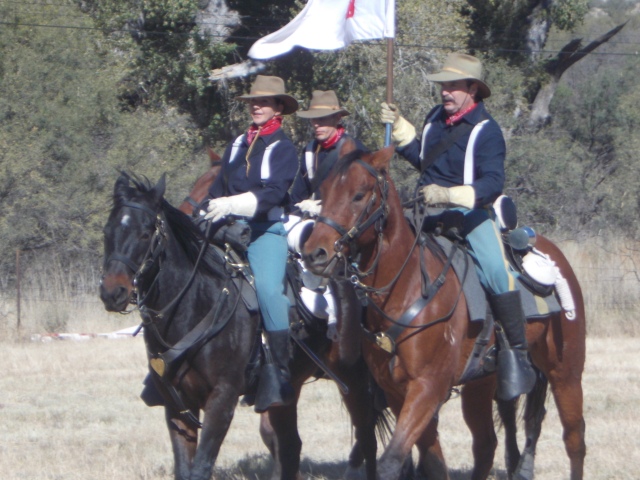 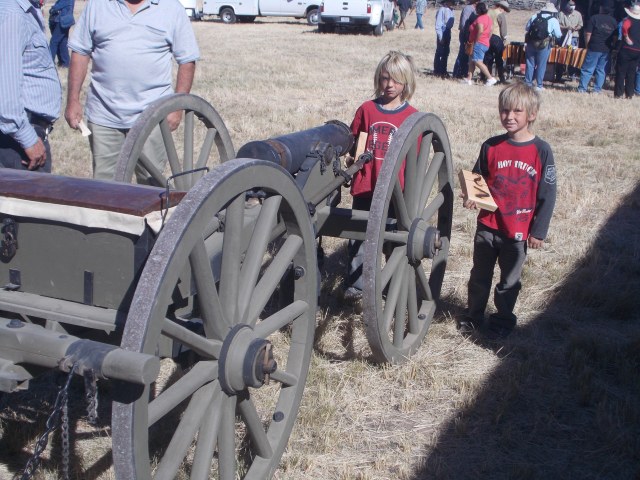 small canon aimed at the boys

In the main arena there were a couple of sessions showing in slow-motion how the cowboys rope a calf, and other horsemanship skills.  The guy in the black cowboy hat was from Missouri or something like that, so they pointed out some of the regional differences of cowboys.  For example, a cowboy in the south wouldn’t be wearing a black hat because it would just get too hot.  And we learned that one of those really tall hats is called a sugar-loaf.  The theory is that there is less heat trapped near your head, it works sort of like a chimney pipe sending the hot air higher…and eventually I guess it would dissipate out the top? 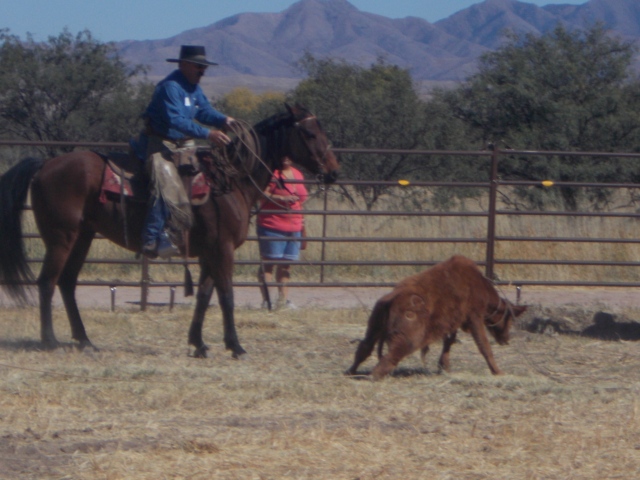 One of the days highlights was a shooting sport on horseback.  Don’t know the actual name of this growing sport but it sure got the kids excited.  There were 2 shows during the afternoon, and we had to watch both of them! 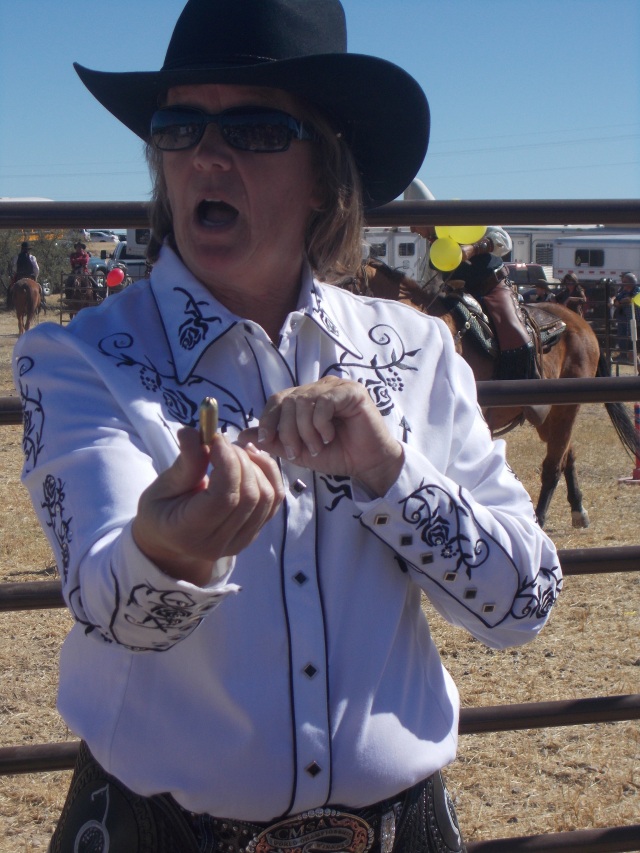 The riders have 2 guns, each with 5 bullets.  The bullets are full of a black powder that funnels out as it leaves the chamber, virtually a flame of sparks that hopefully hit its target, a balloon on a stick waving in the breeze as the rider passes by.  The prime distance to shoot from is 10 feet.  At 20 feet it is harmless (& pointless).

The riders ride through the course marked by the balloons, aiming as they approach and/or pass by.  When they have passed (& hopefully shot) the first five balloons they replace their gun and retrieve their 2nd loaded gun and attempt to shoot the next 5 balloons. 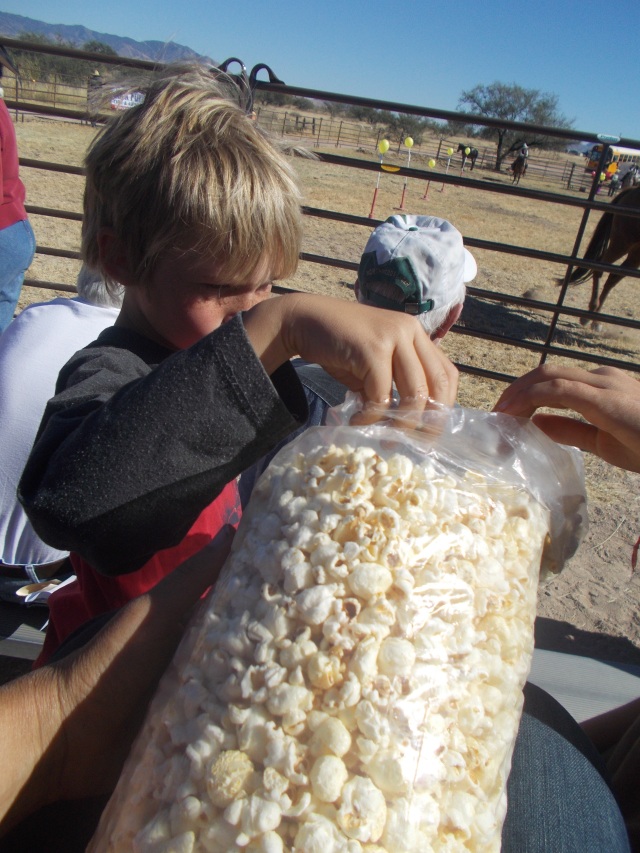 Found a fresh bag of kettle corn 2 older ladies left under their seat. When they didn’t return for 30 minutes I figured it was fair game and we devoured it! 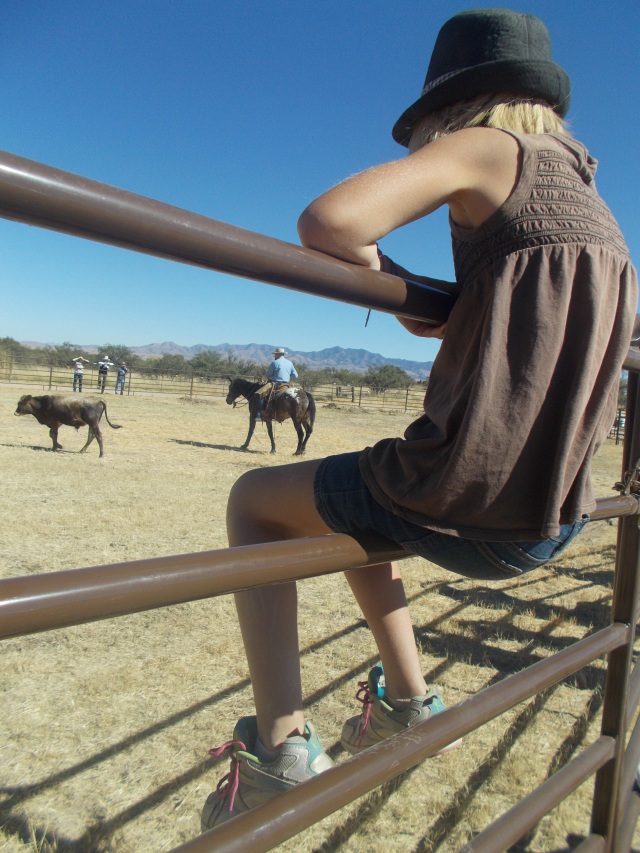 Gaelyn on the rails, enjoying the day. 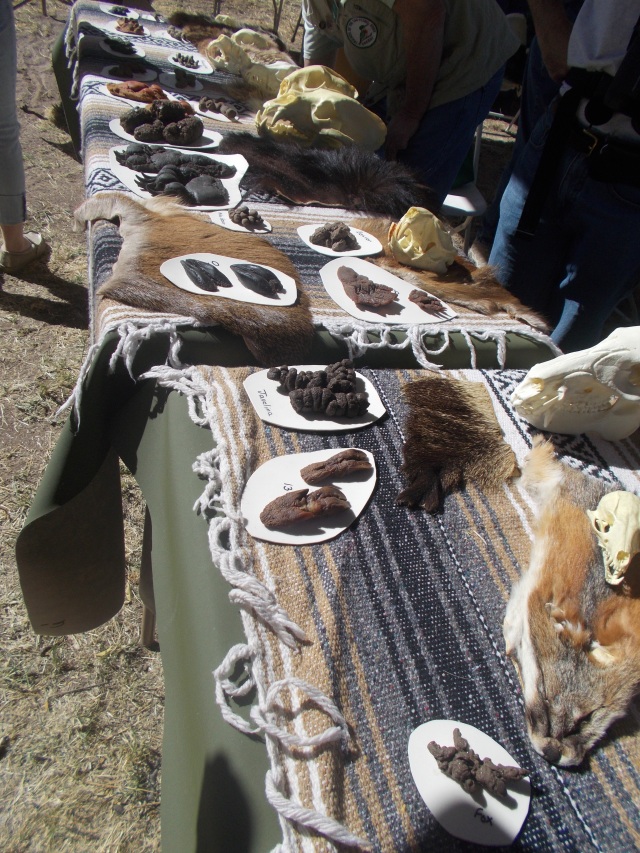 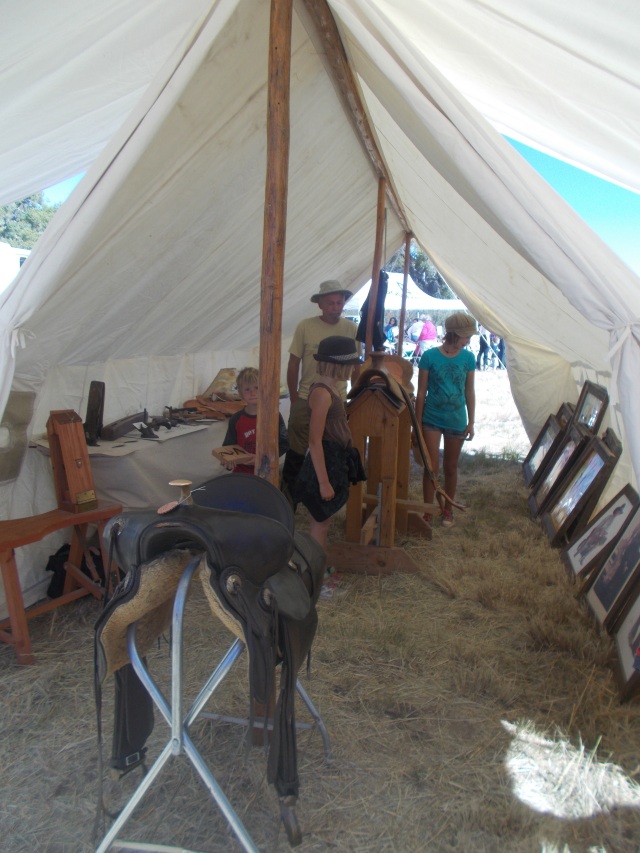 Art displayed inside an old-fashioned tent 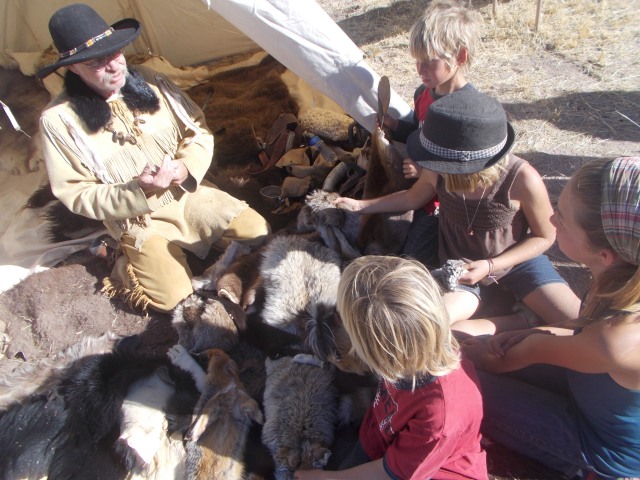 Another highlight of the younger 4 was the guy with all the furs. We hung out there several times during the day. 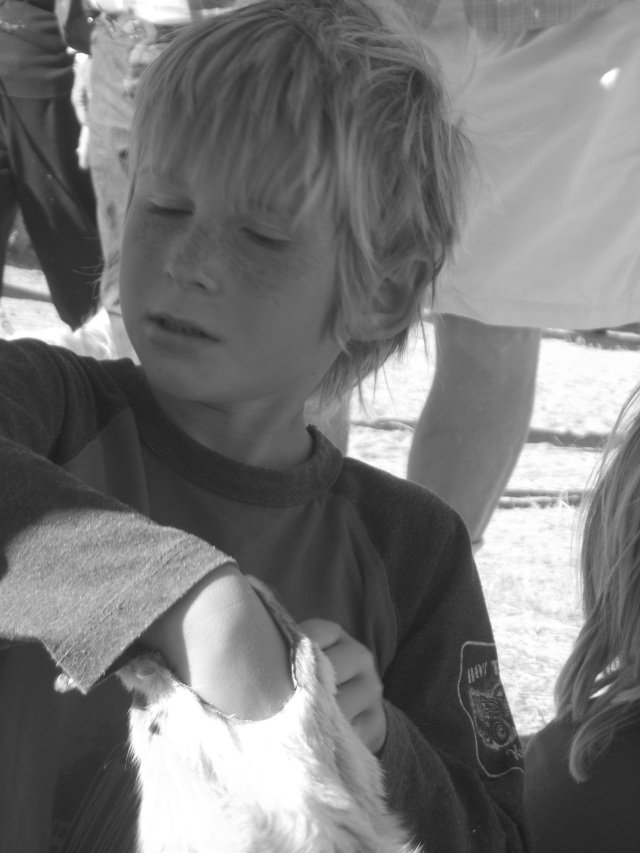 Laars enjoyed putting his hand down the neck of the red fox. What he was looking for, I don’t know, but he didn’t find it. 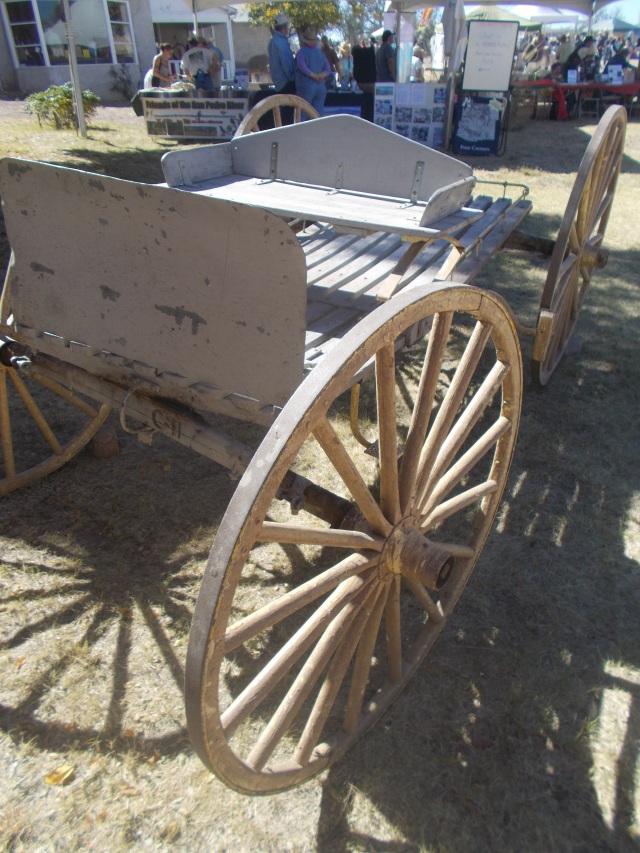