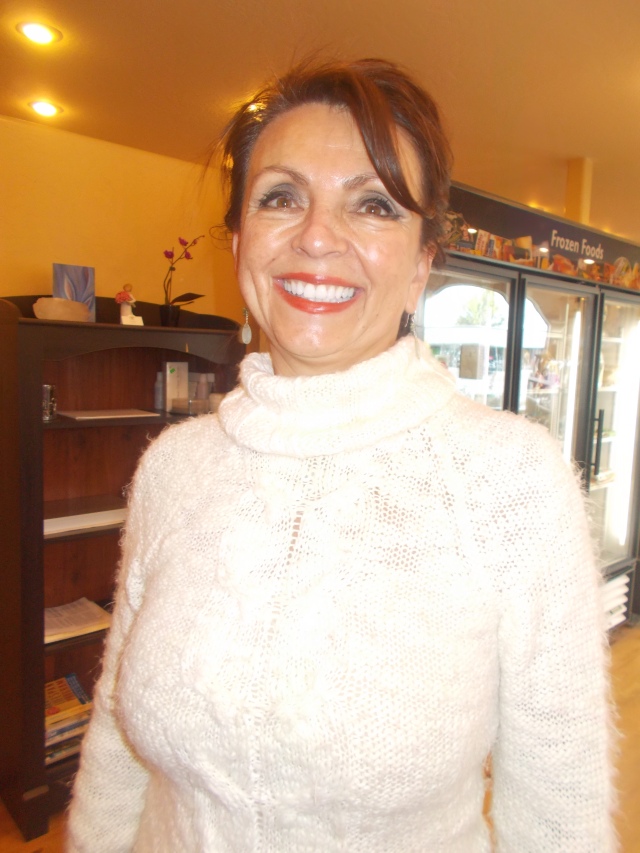 This past summer when our daughter, Rauchelle brought her baby girl to visit us in Cortez, Marin took ill.  Not sure if it was just teething, or what was up,  we just knew something wasn’t right with her.  So Rauchelle took her down to the local health food store to ask for suggestions or ideas.

That’s where Rauchelle met Dyanna Hoffman.  Dyanna did muscle testing (aka Applied Kinesiology) on little Marin, recommended she take calcium lactate.  Literally, within 2 hours she went from lethargic & droopy head to perking up.  She still wasn’t feeling ‘herself’ for a few more days but the supplements seemed to be exactly what she needed to process all that was going on in her body.

Seeing such a huge and quick change in Marin’s body I thought maybe a few of us could do with some guidance to better health.

We Mom’s tend to look after the family member’s first, but like they instruct on planes about the over-head oxygen masks, help yourself first and then your loved ones.  So, that’s what I did.  I went to see Dyanna first.

Well, almost.  Danaka went before me.  And when I saw a change occurring in her, I scraped enough money together to get me going, too.

Amazingly, we started to see changes quick and furiously for both of us.  Improved digestion, less depression, loss of weight, improved sleep, etc.  A huge change for me was the elimination of panic attacks, something that had just started to manifest itself in me since the end of May.  Thank God those are gone now!

So then I took Laars, and we saw a dramatic decrease in negative physical contact with family members (i.e., scratching, hair-pulling, kicking, biting), less temper tantrums, more co-operation and improved communication of his thoughts.  And something he wasn’t necessarily lacking….more energy.  The wiggles are sometimes more pronounced now but he is less irritated and thus easier to get along with.  But then again, wiggles are par for a healthy 6yo boy.

Toveli was the last one to start seeing Dyanna, and has had some improvements and she’ll continue with her supplements and I’m sure the improvements will continue to come.  She had been keeping a food journal and indicating her emotions for a few weeks before seeing Dyanna and the muscle testing confirmed what her food diary had already expressed: she doesn’t do well with pasteurized dairy.

I highly recommend getting some Muscle Testing done for you and your loved ones if you are curious as to what might be up with your body.  Dyanna was a God-send to us at this time in our life and travels.  And if we ever come back to Cortez, we will for sure come see her again.

So, it turned out that it was Dyanna’s birthday last week so we stopped by to sing “Happy Birthday” to her and she turned it into a bit of a photo-shoot (at which I jumped right in with the idea)!

Birthday Girl! We stopped by the store to sing “Happy Birthday” to her, out of key of course! 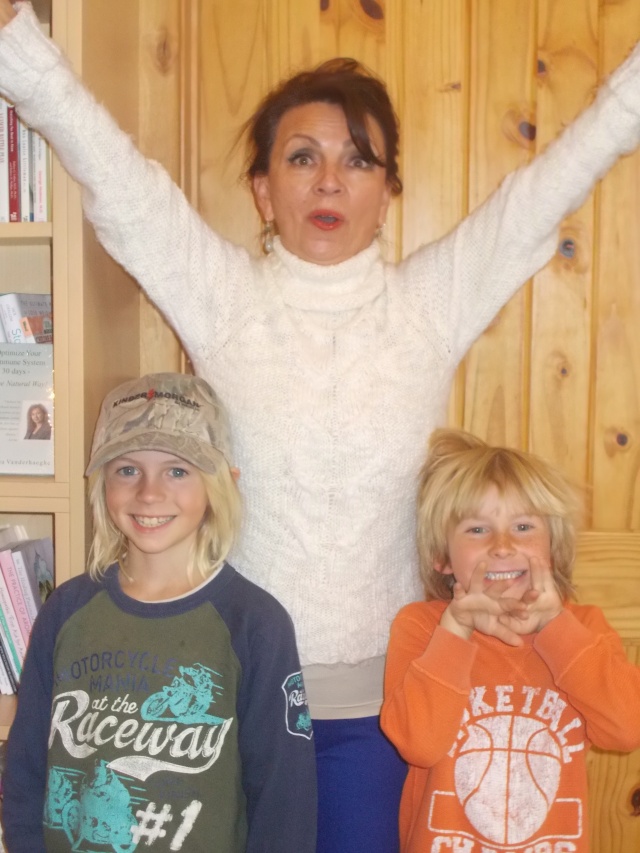 Dyanna and the boys, Anders and Laars

Dyanna and the kids. She loves kids. Three of ours became her clients.

Dyanna said she was so blessed/moved by us stopping in and singing to her, that on the spot she planned a “Going Away” party for us.   So this past Monday we crashed her place for a Pizza Party!  Her son, Dylan, came from Santa Barbara, CA (he was coming here anyway, so Dyanna just made sure he came in time for our party so we could hang out and get to know each other), and her daughter, Monique with her sweet baby-belly. 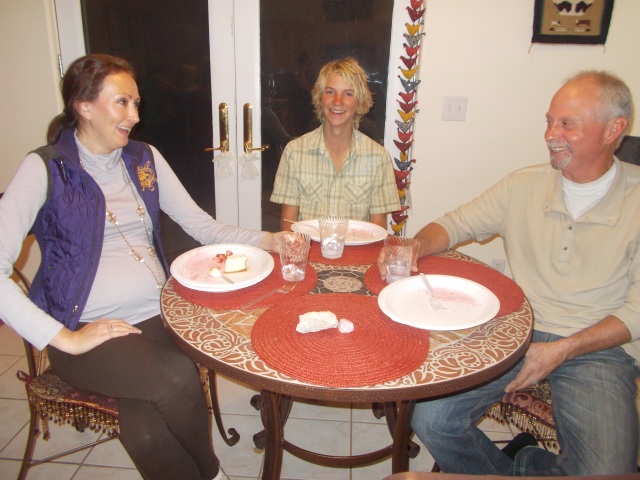 Monique has done a lot of traveling internationally, volunteering in orphanages since she was a young adult.  We enjoyed hearing some of her stories but time ran out as we had sooo much to talk about.

Everette & Dylan, manning the kitchen. Dylan took care of the pizza’s baking while telling us about his schooling (Depth Psychology), his love for writing, and how much he loves rain and NOT traveling!

After the kids were filled up with gourmet pizzas, spinach salad and sparkling water, they devoured the homemade cheesecake with strawberries, then Dyanna hung out the kids playing games while the rest of us adults continued to chitchat and Laars took our Rock book around to identify the rocks & gems adorning the house. 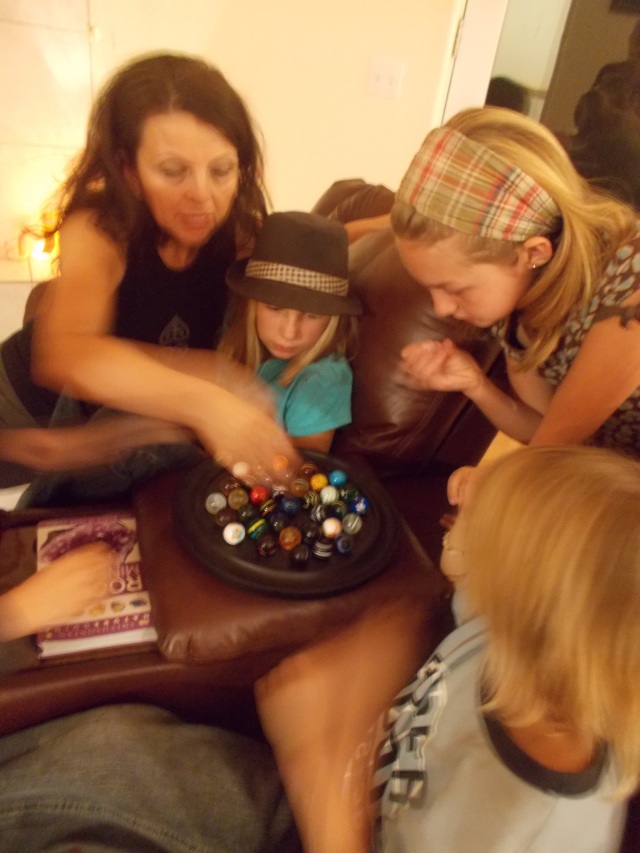 Monique helped the girls learn how to make the Singing Bowl sing, something they both seem drawn to.  I wonder what it is about the resonance that is so magical?

Gaelyn thrilled that she got the hang of the Singing Bowl 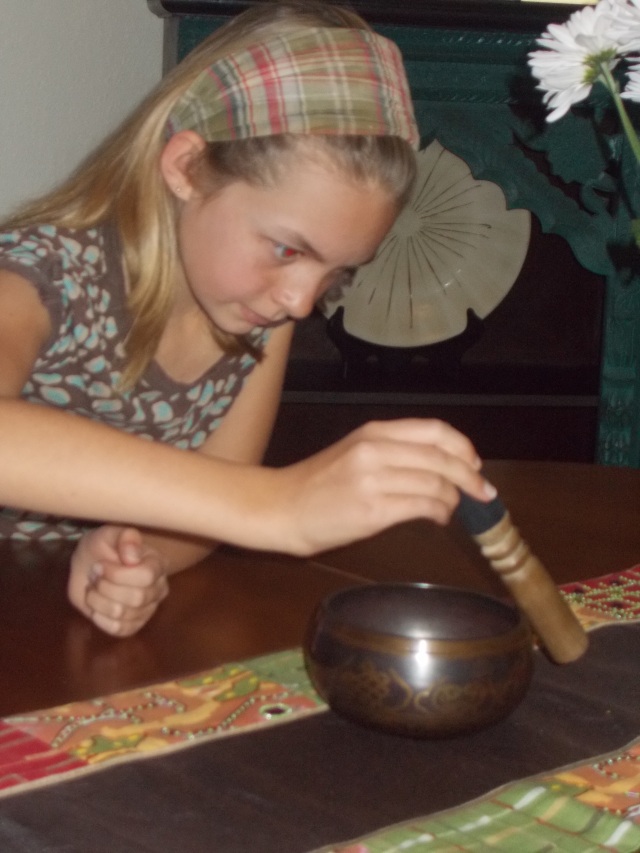 Toveli mesmerized by the vibration.

After Monique left we marvelled at the moon peeking through cauliflower-clouds, then taught Dylan and Dyanna to play “Mafia”.  Mitchell, Maret and Everette were tested for their dosha (Ayurveda) and they were all Vata’s (we have 1 Pitta, 2 Kasha, and 6 Vata).

Muscle testing Maret for her dosha.

The evening ended with the kids singing Canada’s Really Big!  and lots of hugs, blessings, “going to miss you”s, and the whole drive home family-members saying “That was so much fun!”

Dyanna, you and your kids were a hit with our tribe!  Thank you so much for not only opening your home to us, but more importantly for opening your heart.  Thanks for sharing your love of life and family, for serving our kids’ favourite foods,  teaching us about Ayurveda (I’ve started reading the book you gave me), & sharing excitement about our adventures.

(Wish I could take Dyanna along with us on our travels, but we’ll just have to swing on through Cortez, CO sometime in the future.)