Anders often makes the official first-contact with new neighbours and explains things about our family…..who we are, what family members are missing, and where we come from.  It was no different with Michael, except that he had already heard about us from the month we spent at Playa Escondida.  He arrived well after we had moved on but he was told about where we had set up our campsite and was able to view the fairyland that Toveli (with sister help) had built down at the beach.  It was still surviving there on the beach!

Michael made friends with the whole family, visiting with members who walked past his campsite on the way to the office, or who stopped to visit with Bernie at anytime of day.  But the boys were especially taken by him…..particularly when Michael brought supplies (1/2″ pvc pipe, shine magazines) to our camp to make a blow dart gun and the appropriate ammunition. 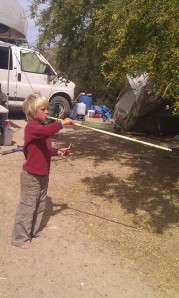 That same day he played Bocce Ball with the kids and then left us with it as a gift.

Michael is a hit. 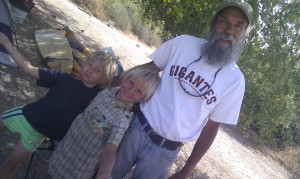 Except that he left us now. 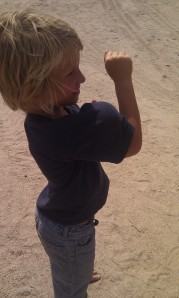