Bernie (Powell River, BC) was the first person we met here at Los Frailes and he’s The First for many potential campers.  He pulls his little RV up beside the palapas right on the edge of the beach and parks there for 5 months each year, never moving his vehicle.  He has an old bicycle with a basket to ride to the vendors.  He kayaks and fishes every morning.  He shares cold beers with the guys that lounge in the shade of his palapas, each bragging about something.  He shares his campfires, and crackers and cookies, and stories galore in his strong German accent.  He prefers to sleep on the beach in his tent where he can watch the shooting stars and imagine how fast it would be to die if one entered his tent.  Always optimistic. 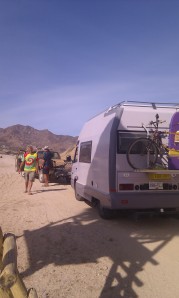 and now the beach seems empty.  Missing his tie-dyed shirts, his positive attitude, his warmth and acceptance.

But we’ve acquired the 2 beach dogs he had ‘adopted’ ….. Cocoa and Latte.

2 thoughts on “Bernie the Beach Dude”