A lone kayaker went out from our beach on New Year’s Eve around 10am on calm waters.  His friends called a search on when the sun had set and he hadn’t returned.  A Ham message was sent out & received at another beach where they sent out a power boat who retrieved the kayaker (& Dewey who had set out to Dead Dog Island in search of him).  In the morning Mitchell sailed out to the island to tow back Dewey’s kayak, waves crashing, filling up the kayak.

We’ve been having strong winds.  Which is why there didn’t seem to be a whole lot of sympathy for the young couple who went out in a borrowed canoe on New Years Day, heading with the wind as they wanted to go to Dead Dog Island beach themselves.  With many warnings to head into the wind, they paddled away from our beach around lunchtime.

Sun set, they weren’t back and there was no search party sent out for them.  Supposedly they were experienced on the waters and their friends swayed between rescue and ‘let them learn a lesson’.  At dark we spotted a light flashing from the beach of Dead Dog.  It wasn’t an SOS. Their friends interpreted it as “We’re here and we’re okay!”  Somebody did drive to Cocos Beach to see if anybody would take their power boat out there to pick them up.  The response:  “For a Fee”.  Not taken.

Ramon, a Mexican who has a palapa just up the hill from us at Escondida, returned home later in the evening and was willing to take his boat out in the night, the almost-full moon not having shown his face yet.  The canoers were ecstatic to finally be retrieved.  They were still wet and shivering, having capsized the canoe when they had attempted to leave the island in the afternoon.  The flash ‘message’ they had sent was meant to be ‘Distress’ but with a camera they weren’t able to change the flash into dots & dashes.

I’m glad for them their friends finally rescued them.  Far better to spend New Year’s Day (or any evening) with their friends, roasting by an open fire with Tequila or something spicy heating up their insides. 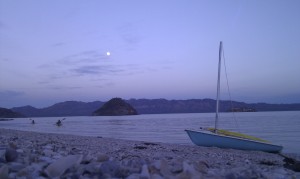